Written off and mocked, the Brazilian midfielder is enjoying a new lease of life with Barcelona – paving the way for a shot at the 2018 World Cup.

When Paulinho was presented to around 2,000 nonplussed Barcelona fans at an almost empty Camp Nou, there were unverified reports that he had paid €7.5m of his own money to make the deal happen and that not a single Paulinho shirt had been sold in the club shop on the day of his unveiling.

During the unveiling, Barcelona were in crisis, living out a nightmare. After being outmuscled and outmaneuvered to release Neymar to Paris Saint Germain, the club and player were made into a mockery.

With the pressure on him already ramped up, Paulinho didn’t exactly fill the Camp Nou faithful with optimism while attempting a few straightforward kick-ups at the event and only managing a paltry six. Critics snarked, this is what €40 million buys you in the absurdity of the 2017 transfer market, they muttered.

What happened next is a truly remarkable turnaround. As La Ligaapproaches the winter break, the Brazilian has become a cult hero to the Blaugrana faithful, doing so in a way which seemed impossible 3 months ago. Despite making only a handful of starts, Paulinho has become one of Barcelona’s most consistent performers, expertly playing himself into contention for a key role in Brazil’s 2018 World Cup squad.

Paulinho celebrates a goal against Getafe by ‘smoking a cigar.’

However, as things fell apart for Villas-Boas and a stint under the management of Tim Sherwood at White Hart Lane, combined with Brazil’s scarring exit from the 2014 World Cup, Paulinho’s promising career stuttered.

He was cast aside in North London, the likes of Nabil Bentaleb and Ryan Mason preferred in the increasingly out of fashion No. 8 role that Paulinho commandeers. “He’s come here from another country and the language has been a problem for him,” Tim Sherwood said. “It’s a different game from what he has been used to. It’s very fast, with no respite.”

It is no surprise that when Luis Felipe Scolari, the Guangzhou Evergrande coach at the time, similarly disgraced at the 2014 World Cup, came calling the Brazilian appeared to be cashing in  on early retirement at the age of 27 in the Far East.

Paulinho won the Chinese Super League twice and an AFC Champions League while at Guangzhou Evergrande.

In the frenzied, disbelief of post-Neymar Barcelona, Paulinho’s arrival seemed to be the equivalent of placing a sticking plaster on the Titanic. With Neymar’s departure, it somehow brought to light that other areas of the Blaugrana squad was in drastic need of repair as well.

With Xavi now a distant memory, Iniesta’s departure a growing inevitability, and worries about whether Messi can continue to lead the team in the customary emphatic fashion, things looked bleak in Catalonia. Moreover, Barcelona’s overall approach to transfer’s was receiving due criticism and new coach Ernesto Valverde, who had never managed a superclub like Barcelona,  did little to quell discontent.

Instead, with winter approaching, Barcelona sit pretty atop La Liga and can boast of legitimate breathing room between them and second-placed Valencia, and an even bigger gulf of points in front of the capitulating Real Madrid and a surprisingly limp Atletico Madrid.

Paulinho’s influence cannot be underrepresented by some very impressive goal statistics. In 2017 so far, Paulinho has scored 22 times with 12 for Guangzhou, six for Brazil and now four for Barcelona.

“I didn’t come here to shut mouths,” Paulinho told Barcelona’s official website. But that’s exactly what he’s done, despite not being a regular.

Introduced as a second-half substitute against Sevilla, he was given a standing ovation by the home support at Camp Nou. His cult status is almost assured already. “From ridicule to an idol,” wrote Ernest Folch, the editor of Catalan newspaper Diario Sport.

The winning goal against Getafe in September was followed by a bullet of a header against Eibar the following Tuesday. He also scored the clincher in a hard-fought 2-0 win over Athletic Bilbao after making the type of run into the box which few other Barca midfielders would have made.

According to an interview with El Periodico, Messi tapped up Paulinho during the Argentina vs. Brazil friendly match in Australia in June. Paulinho was gathering himself to take a free when Messi sidled up to him and said, ‘Are we going to Barcelona or not?’ Paulinho—who replied, ‘If you want to take me there, you can. I’ll go’—was so stunned he had to ask Willian to take the set piece.

Joaquim Piera, a Catalan journalist with Diario Sport, who is based in Sao Paulo, Paulinho’s hometown, told Bleacher Report, “Messi already knows Paulinho from the World Cup qualifying stages. In November last year, Brazil destroyed Argentina 3-0, and Paulinho played an enormous match. I think Messi thinks Barca needs players who are already the finished article. Paulinho is a player that solves what he needs. Paulinho gives a little bit of tactical anarchism that is convenient for Messi.”

To earn Messi’s approval is vital to a player’s success at Barcelona. Players who haven’t enjoyed it don’t survive long at the club with him, including star players like Zlatan Ibrahimovic and Samuel Eto’o.

The same rule applies to fringe players like Isaac Cuenca or Cristian Tello. “If there are players Messi considers don’t have any value for the team,” Jordi Quixano, told El Pais, “I am not sure if they don’t get on well, but for sure Messi is dry, not nice, with them. Messi wants to win; he wants titles.” 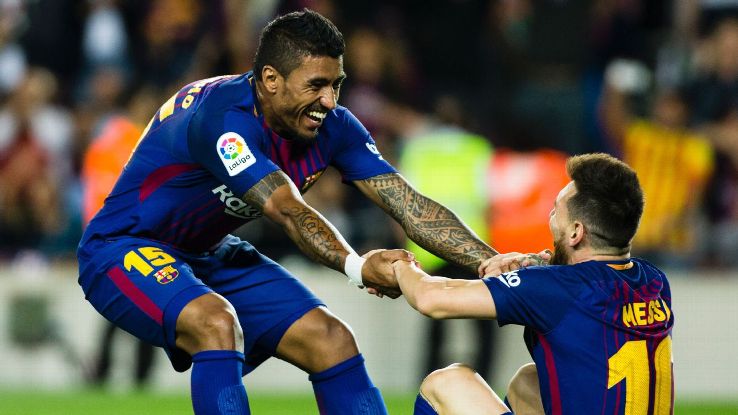 For Brazil, Paulinho demonstrated his much-doubted class during Selecao’s impressive World Cup 2018 qualification campaign when in May 2017 the box-to-box midfielder bagged a hat-trick in a 4-1 victory in Montevideo over Uruguay. The highlight, with Brazil trailing 1-0, the Barcelona midfielder took the game by the scruff of the neck and fired home an equalizer from 30-yards.

Under Tite, who took a year-long sabbatical to study the tactics of European football, Brazil are a much more cohesive and organized side. Without losing the flair and attacking mentality that is always attributed to Brazil, Tite has given the five-time World Cup winners a much more compact shape making them difficult to break down.

A quick glance at the CONMEBOL qualification table proves that Tite’s Brazil are streets ahead of their South American counterparts, only suffering one defeat in 18 and finishing ten points ahead of second-placed Uruguay.

Despite his recent renaissance with Barcelona, Paulinho’s place in the Brazil team is far from assured. The likes of Casemiro and Fernandinho are both performing well for their respective clubs, and Renato Augusto and Giuliano have both been granted opportunities to enter the debate for the first choice mimidfield three.

Brazil will face Russia and Germany in the next round of international fixtures in March 2018, games which, as well as pressing for a starting berth with Valverde’s Barcelona, are likely to be Paulinho’s last chance at impressing in front of Tite to attain a starting place in his Brazil side.