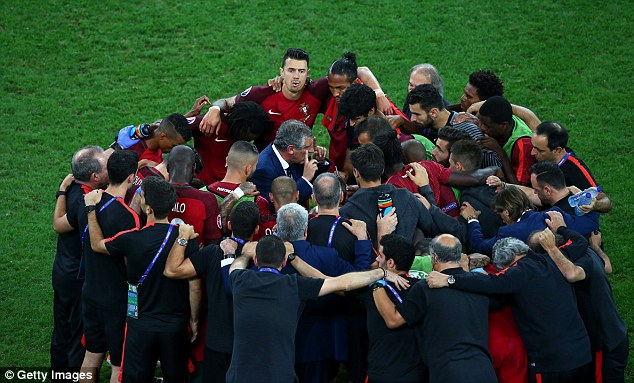 Despite not yet winning a game inside 90 minutes there is something dangerous about the semi-finalists here. Their coach has a history of achieving the unachievable and could be set to reach the unreachable if ‘A Selecao das Quinas’ can defeat Wales at Euro 2016.

The Panenka takes a closer look at the Portugal boss’ team and tactics while paying special attention to the demons of disappointment from Euro 2004 and how that spirit is being resurrected to work in their favor 12 years later.

Portugal and Fernando Santos have reached the semi-finals of Euro 2016 in unconvincing fashion where they will meet Wales on July 6 in Lyon. In fact, they are probably the least popular team left in the competition.

However, the Portuguese coach admits that it is a results business and has no problem about receiving criticism for winning ugly like he has done at the tournament so far.

Santos took Greece to the last-16 at World Cup 2014 in Brazil with the same mentality after succeeding Otto Rehhagel, six years after the coach masterminded the Mediterranean country’s sensational triumph at Euro 2004. A competition held in Portugal where the host nation where left thunderstruck by a 1-0 defeat in the final.

There is now an interesting sense of irony to see that the man who inherited the ‘ugly’ Greek European Champions of 2004 is now on the cusp of achieving what the defeated finalists were unable to do when they hosted the tournament.

The similarities between the two teams run deep with Santos’ Portugal understanding his side’ limitations, implementing a cautious attitude and possessing a penchant for outsmarting rather than out classing the opposition through a tactical flexibility. Furthermore, the constantly disparaging tone to which Portugal are addressed with in France is concurrent with the Greek underdogs 12 years ago.

Before being offered the national team job by the Greece FA in 2011 the Portugal boss was already well known in Greek football having managed AEK Athens and Panathinikos. The highlight of his career there reached the pinnacle of lifting the Greek domestic cup in 2002.

In continuing with the Rehhagel formula, Santos helped give Greece its style and in doing so a personality, an identity. Santos started by leading Greece to 17 matches undefeated and took the country past the group stages in both Euro 2012 and World Cup 2014. His final game for Greece occurred in the penalty shootout defeat to Costa Rica in Recife, Brazil. Knowing that his contract expired the following day, Santos and his valiant Greek soldiers fell to a 5-3 defeat on penalties after extra-time finished 1-1.

After the game, Santos ended up being banned from the touchline for eight competitive matches for a verbally abusive outburst while in the Greece dug out. A ban he would carry into his next job.

Fernando Santos replaced Paulo Bento just one game into Euro 2016 qualifying, a 1-0 loss at home to minnows Albania. Bento was a very rigid specialist who used the same line-up in most of the matches and the FA wanted someone different, especially someone who could develop the promising young talents we see at Euro 2016 today.

In qualifying Santos lived up to his alleged devotion to defensive tactics winning four of his seven games in charge 1-0, similar to Greece, who won every game by the same scoreline at Euro 2004.

Despite being undefeated during Santos’ reign in qualifying Portugal still entered Euro 2016 a long way off from being considered among the front runners to win the competition. However, if you’ve been paying attention, you will have seen the slight tactical interventions that Santos has used to force Portugal into becoming real bona-fide contenders.

The Portugal boss has a reputation of being negative or defensive but in truth, he is simply flexible in the way that he adapts his sides in order to adapt the shape or system that is most likely going to win the game. It is football managing at its best.

Antonio Conte had been heralded at Euro 2016 for his ‘tactical genius’ but his side played one way, it worked until it didn’t. Conte couldn’t adapt to Germany mirroring his 3-5-2 system and paid the iron price as a result. Santos on the other hand has shown he can change things, as and when it’s necessary.

An example of this occurred in the truly forgettable and mind numbingly boring last-16 tie against the heavily fancied Croatia. After an unimpressive group stage where Portugal looked largely anonymous, Adrien Silva was deployed to nullify the threat of Luka Modric and Ivan Rakitic.

It worked, a defensive master class against a side that had given Spain a torrid time a few days earlier. Portugal restricted Croatia to barely having a shot on goal and eventually nicked the game in extra-time through a Ricardo Quaresma header in the 117th minute. Very Greek indeed.

In the quarter-final with Poland, his side trailing 1-0, Santos switched his side to 4-3-3 after 10 disappointing minutes and before half time, hey-presto, they were level. In the game with Poland the Portuguese did try to attack, however, their reputation has preceded them with critics suggesting they were playing for penalties. In truth, as the game wore on it was Poland who were settling for the shootout.

Renato Sanches scored the equalizer against Poland. Bayern Munich signed the 18-year-old midfielder from Benfica before the 2015/2016 season had even ended, such was the importance he joined the Bavarian club. Santos has put his faith in other youngsters at Euro 2016 as well. Raphael Guerreiro has impressed at full-back while Andre Gomes and William Carvalho have both impressed in the flexible midfield system.

Portugal’s strategy for both knockout games has been undoubtedly “Greek.” It is as if Portugal have truly heeded the lessons of realism and pragmatism from the tragedy of the Euro 2004 final and take it to heart, employing it in their football 12 years later.

The big difference between Portugal today and Greece at Euro 2004 is the quality in attackers. Cristiano Ronaldo dominates the headlines but Nani, Joao Moutinho, Ricardo Quaresma can all do more than their fair share of damage in the final third.

Greek journalist, Costas Btatsos said: “Fernando wasn’t really able to bring Portugal to Greece, because he didn’t have talented wingers over here, but he most definitely brings Greece to Portugal. He has Greece-d them. All the Greek fans support him, and it gives us yet another chance to criticize the FA for not persuading Santos to stay.”

4 thoughts on “Fernando Santos, Portugal and the Greece Paradigm”