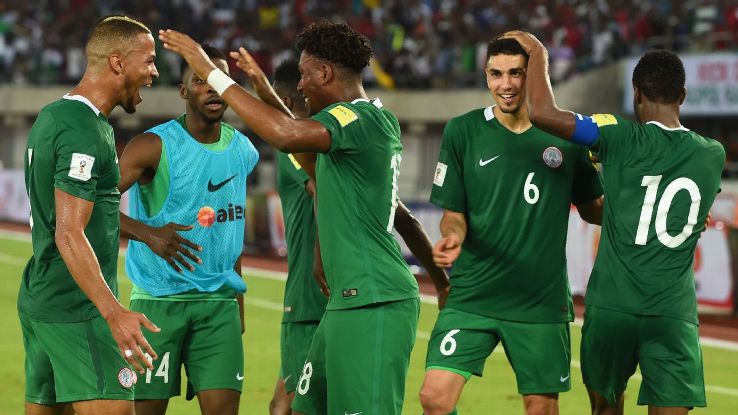 (BBC) On Saturday, the Super Eagles became the first African team to qualify for Russia when beating Zambia 1-0.

Nigeria have reached the second round at three of their five World Cups.

“We’ve been to a few World Cups in recent years, and we need to be looking at progressing further – rather than crashing out in the early stages,” Olofinjana told BBC Sport.

“I think the country should be looking at perhaps the quarter-finals,” added the former midfielder, who won over 40 caps for Nigeria before bowing out at the 2010 Africa Cup of Nations.

Only three African teams have ever reached the last eight at a World Cup.

Cameroon were the first to achieve it in 1990, followed by Senegal in 2002 while Ghana were a missed penalty away from becoming the first African team to make the semi-finals in 2010.

Reaching the last four is the stated aim of Nigeria Football Federation president Amaju Pinnick who told BBC Sport in 2015 that all his organization’s efforts “are geared towards getting Nigeria to play the semi-finals in Russia.”

Olofinjana believes that coach Gernot Rohr, who has been in the role since August 2016, can marry youth with experience in a side that made light work of a qualifying pool widely labeled the ‘Group of Death’.

Nigeria qualified with a game to spare from Group B, finishing above reigning African champions Cameroon, an Algerian squad who impressed at the 2014 World Cup and 2012 Africa Cup of Nations winners Zambia.

The Super Eagles have reached the second round at three World Cups – 1994, 1998 and on their last appearance in Brazil three years ago – but Olofinjana says the team can make history next year.

“We have a coach who knows how to bring everybody together, and the boys we’ve got are hungrier and have a bit of experience – players like (captain) John Mikel Obi, Victor Moses and Ahmed Musa.

“They can bring the younger ones with them so that we do not just to go the tournament to enjoy it but to push ourselves to the next level.”

Since making their World Cup debut in 1994, Nigeria have reached every finals bar the 2006 edition in Germany.

Five teams from Africa will go to Russia, with the remaining four being determined in November.