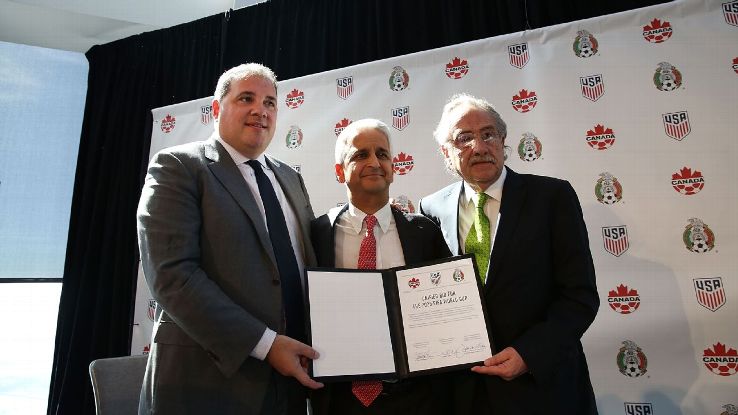 The Oceania Football Confederation (OFC) has announced that it is behind a bid by the United States, Mexico and Canada to host the 2026 World Cup.

The 2026 World Cup will be the first 48-team, 80-game World Cup and will be an enormous undertaking. With Europe and Asia blocked from bidding because their confederations will host the next two World Cups, and South America publicly focusing on 2030, the door is wide open for CONCACAF.

The letter from the USA-Mexico-Canada World Cup 2026 bid asking FIFA to fast-track the bid for potential 2018 final approval.

In the Oceania Football Confederation’s statement on Tuesday, Chung said the United States-Mexico-Canada bid “makes sense on a number of fronts.” He noted, as organizers like U.S. Soccer President Sunil Gulati did last week, that the infrastructure was not an issue, and that the region had not hosted the World Cup since it was held in the United States in 1994. Mexico has hosted twice, in 1970 and 1986.

A day the United States-Mexico-Canada bid was announced, FIFA revealed that the agenda for its congress in May in Bahrain included discussion of the request for the expedited — and exclusive — bidding process. If the proposal is approved, FIFA will be tasked with carrying out inspections and issuing a final report to FIFA’s member associations by March 2018, with a final vote two months later.

Most agree the event will break all attendance and revenue records for the World Cup, a fact that will surely not be lost on FIFA and its 211 member associations, many of whom get most of their revenue from payouts related to soccer’s quadrennial showcase event, whether they qualify to play in it or not.