Nottingham Forest have signed former Arsenal striker Nicklas Bendtner, these are his finest moments in quotes and pictures.

The 28-year-old, who was a free agent after leaving German club Wolfsburg, has agreed terms with the Midlands club with a 2-year-contract. The Denmark international told BBC Nottingham Sport: “My main goal was to come back to England.”

Adding: “What happened in Wolfsburg was a sad situation. I have made mistakes in the past, but I am looking to the future.”

The Dane has experienced a career that promised so much but has most recently fallen by the wayside, at times to comical effect. These are the highlights of his careers as told by the man himself.

The former Arsenal striker has never been short of self-belief:

“I’m going somewhere where I know I can be happy to play. With a team where I can score goals and preferably to win something. I do not want to sit on the bench and staring. I love playing lots of games.”

When asked where, The Lord replied:

“If you ask me if I am one of the best strikers in the world, I’d say ‘yes’ because I believe it.”

On a separate occasion he laid out his five-year plan:

“I want to be top scorer in the Premier League, top scorer at the World Cup and, within five years, I want to be among the best strikers in the world. Trust me, it will happen. I look around at other players, I see my own ability and I can’t see anything that tells me it won’t happen, I’m sure people will think ‘What is he talking about?’ But as I have done before, and as I will do again, I will sit at the other end and laugh at those people when it is all done.”

At Euro 2012 the striker was fined £80,000 and banned for one competitive international fixture for displaying ‘Paddy Power’ sponsored underwear during Denmark’s game against Portugal. In his defense the man nicknamed as ‘Lord’

“It is just a pair of lucky boxer shorts that I used in the first game as well and have used before the tournament. I didn’t know I was breaking any rules but I am aware of that now.”

The striker, dubbed “Lord Bendtner” for dating Baroness Caroline Luel-Brockdorff in 2009, had this to say on crashing his Aston Martin:

“My body is my livelihood and I was desperate to find out if I was OK. So I took off all my clothes, even my pants, picked up a wing mirror that had come off the car and checked myself over, front and back. Then I climbed back into the car to find my phone. First I called my dad, to tell him I’d had an accident but that I was OK. Then I rang the club to say I’d be late for training.”

After falling down the pecking order at the Emirates he boasted:

“I should start every game, I should be playing every minute of every match and always be in the team.”

While discussing player wages he made this comparison:

“It is wrong to compare my salary to the salary of a businessman. Compare it to movie actors instead.”

His confidence is remarkable; there is a touch of the Zlatan Ibrahimivoc about him. If only he wasn’t constrained to just football:

“Whether it’s tennis, badminton, football, whatever. I just go out there and think I can do it and most of the time I can.”

Upon signing for Wolfsburg the forward was handed the No. 3 jersey. When asked about the unconventional squad number he said:

“My mother chose it for me.”

In 2009, Nicklas Bendtner was forced to make a groveling apology after being pictured outside a North London nightclub with his trousers falling down, hours after the club’s Champions League defeat to Manchester United.

Before leaving Arsenal in 2014 he gave a frank an honest interview to The Daily Telegraph:

“If we talked about all that we could be here for about 20 minutes talking about all the stories made up,” he said “For example; I did an interview with a Danish paper where they asked me ‘if you could play for any club in the world who would it be?’ I said my dream as a boy was to play for Barcelona and if I could play for them then I would be happy. That got translated to ‘I am going to Real Madrid or Barcelona in the January transfer window’.

“You try to project an image of yourself and it gets misunderstood and things are written about you that aren’t true.

“I was a bit hot-headed when I was younger maybe, but that’s part of life. You grow up and you expect people to grow up with you and see that. And when they don’t do that and they still try to knock you for things and print stories that are not true, or happened a long time ago, then it’s frustrating and you get upset.”

The fun didn’t stop there though. Toward the end of his spell in Germany with the Volkswagen owned German club Wolfsburg, the Dane posted this picture of himself on his way to training stood next to his Mercedes-Benz. As  result, he was fined a hefty sum by the German club and never played in the Bundesliga again.

It does appear that ‘Lord’ Bendtner had grown up a little these days however that hasn’t stopped him from living up to is regal title by accepting a small plot of land in Scotland bought for him by a Danish tabloid newspaper in 2015.  In addition, the Great Dane, posted this picture in Instagram to announce his candidacy for the Danish election.

In fact, Nottingham Forest’s new signing has an Instagram gallery which is well worth a look. Here’s another highlight: 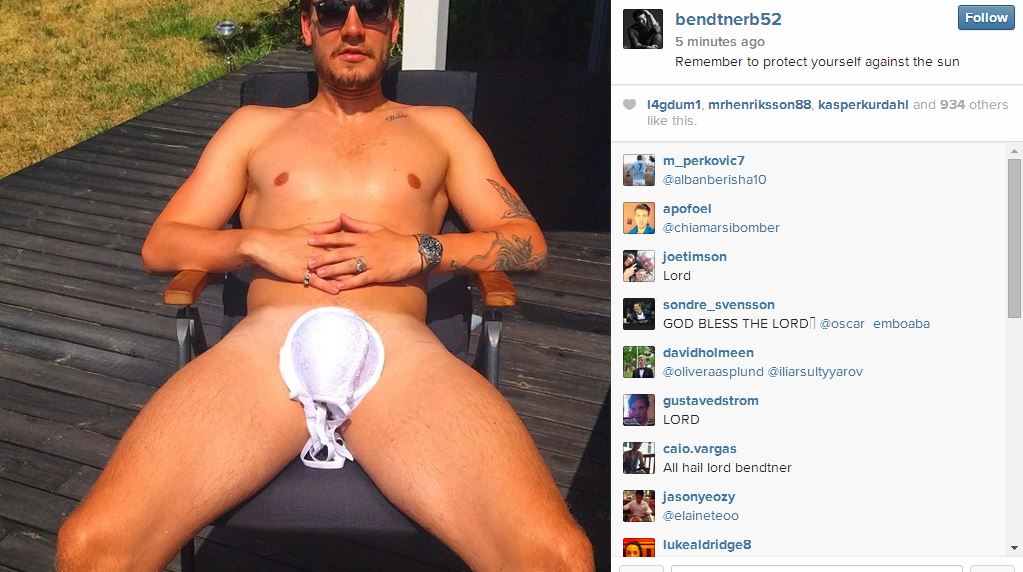