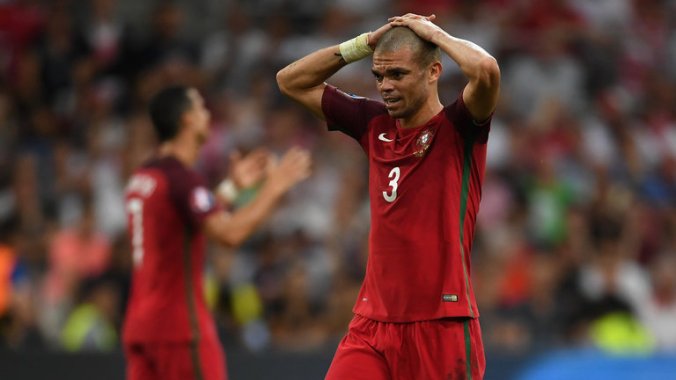 The defender played a pivotal role in Portugal’s Euro 2016 triumph and won Man of the Match on the 1-0 victory over France in the final. However, his confident displays in the tournament have done little to repair an atrocious reputation.

The Panenka looks at why Los Blancos have a player among their ranks who is hated the world over.

Portugal’s Pepe has earned himself a reputation as a no nonsense, tough tackling central defender with a penchant for bending the rules and it is the latter of those attributes that have won him a far from favorable reputation.

The 33-year-old was born in Maceio, Alagoas, in the North East of Brazil and moved to Portugal at the age of 18 to sign with Maritimo on the island of Madiera. Already, the tenacious defender is failing to curry favor. The rivalry between the country of his birth and the nation he gained citizenship for, means that on one hand Brazilians aren’t too keen on him for leaving, while on the other to the Portuguese he’ll always be an outsider.

Pepe made his debut for Selecao das Quinas in 2007, the same year he signed for Real Madrid after three fairly successful years with Porto where he established himself as one of the bet in the business, winning the domestic double in 2006.

Los Galacticos paid around $30 million for the defender. Since then the price tag has been justified where his physicality and aggressive style has seemed like a perfect accent for Sergio Ramos’ technical finesse at the heart of Los Blancos’ defense.

Pepe’s looks haven’t ever done him any favors either, many likening his appearance to a frog, but his on-field antics have earned him a reputation as a conniving violent ankle buster who’s behavior often portrays a good case for sectioning.

The reputation for hot-headedness is exemplified in his disciplinary record. At the end of the 2015/2016 La Liga season the Portugal defender had collected over 100 yellow cards and six reds during a career plagued with conduct ranging from deranged to pure idiocy.

The most high profile instances of Pepe’s unhinged personality occurred in the 2016 Champions League Final where during the derby against Atletico Madrid the defender engaged in some stupefying attempts at cunning.

In what appeared to be a harmless coming together with Atleti full-back Felipe Luis, the Real Madrid defender felt obliged to roll around the turf howling in agony. The act did not finish there though. When Luis grazed his opponent’s cheek, Pepe writhed and contorted as if he’d been burnt with a red hot poker, nobody except himself was buying it.

Referee Mark Clattenburg looked on unimpressed but dealt no punishment, adopting a face as if to say, ‘You’re embarrassing yourself.’ The watching world agreed and that seemed the most appropriate admonishment.

Soon afterwards Pepe was play-acting again, this time after another tangle with substitute and goalscorer Yannick Carrasco. Again Pepe clutched his face as if an arrow had split his nostrils, still there was no sanction.

Previous to this hallmark example Pepe has gathered a very long list of misdemeanors. Famously in 2009 he received a 10-match ban after raking his studs down the back of the Getafe player Javier Casquero while he was on the floor before stamping on his ankle and pushing his face into the turf.

Pepe had lost it. In the ensuing melee, for good measure, he smacked Casquero’s teammate Juan Albín. As he left the field after being shown the red card Pepe shouted, “You’re all sons of b*****s,” like a crazy person. This moment was a very a public beginning of the Real Madrid defender’s deserved reputation as a nutcase.

The appointment of Jose Mourinho in 2010 brought another master of the dark arts to the Bernebeu’s backline, Ricardo Carvalho. Together the countrymen formed a formidable defensive pairing.

In 2011 Pepe was sent off in a Champions League semi-final first-leg tie against Barcelona for a controversial challenge on Dani Alves in a heated affair. The Portuguese defender’s reputation certainly hadn’t gone before him as he protested after the defender aimed a high challenge at the Brazilian that caught him just below the knee.

Even on appeal, the dismissal stood and he missed the second-led at Camp Nou. The same season the defender received a straight red card for a senseless elbow on Sevilla’s Alvaro Negredo.

A year later, Pepe was in the headlines again and it was the capital club’s old adversaries Barcelona who were embroiled in the incident once again. During a Copa del Rey quarter-final Pepe was seen to have stamped on the hand of footballing royalty Lionel Messi. A coming together with Cesc Fabregas was also noted in the 2-1 home defeat. On this occasion the defender got away scot-free.

On the biggest stage of all, the 2014 World Cup, Pepe was red carded in Portugal’s opening match against Germany for head-butting Thomas Muller in a completely senseless act. Muller was sitting on the ground and the Real Madrid defender decided to clash heads with the Bayern Munich talisman completely unprovoked. Portugal lost 4-0.

The summer after Portugal’s group stage elimination from the World Cup in South Africa, Real Madrid were playing Roma in a friendly over in the US to showcase European football when a row between Pepe and Seydou Keita erupted into a pre-match brawl. Keita refused to shake Pepe’s hand and threw a bottle at him, but Pepe spat at the midfielder who made shocking allegations against him afterwards.

“Back when I played for Barça he called me a macaque (monkey). From that moment onwards, I’ve seen him as a good-for-nothing,” Keita told Marca. “I haven’t spoken about it in public before because it wasn’t worth it, but that’s why I didn’t want to shake his hand.”

Adding: “It’s unacceptable for someone to spit at me. I really don’t see why I should have to shake his hand, since in his eyes I’m not a human being. I have no interest in discussing things with a person who doesn’t consider me a human being. The way he behaves is out of order. Instead of coming over and asking me why I didn’t shake his hand, he chose to spit at me.”

Pepe’s hall of shame moments truly takes the shine off a player who has actually had a glittering career and been at the center of successes with both club and country.

Two league titles in Portugal and Spain as well as two European Cups and two Copa del Rey’s with Real Madrid completing an impressive résumé which can now boast a European Championship as well. Love him or hate him, he’s clearly done something right.

While the Portugese players celebrated and the defeated French squad completed a lap of commiserations around the Stade de France after the Euro 2016 final, an image of Michel Platini appeared on the big screen along with a message, ‘Merci pour tout.’

Boos rang out in unison around the stadium, reminding us that maybe there is a more hated man in football.