Spain entered Euro 2016 shrouded in controversy and with a hangover from their dire performance at the 2014 World Cup looming large. While many have written off the latest group of La Roja players, is there really much difference between the squad now and the one which lifted the European Championship in 2012?

The Panenka compares Vicente de Bosque’s triumphant 23-man squad of 2012 to that of this summer’s European competition.

Between Euro 2012 and Euro 2016 there has been 13 changes of personnel to the Spain squad. Two goalkeepers, three defenders, four midfielders and four forwards.

Here’s the run down of those brought IN since the 4-0 humbling of Italy in Kiev and those who are OUT.

IN – Alvaro Morata: A product of the Real Madrid youth system the striker left the Spanish capital for Juventus to gain more first team experience. Since moving to Turin he has scored some key goals for the Italian club including an extra time winner it the Italian Cup Final. He is one of the world’s most in form strikers and expected to be the subject of a lengthy transfer saga this summer due to the fact Real Madrid inserted a buy back clause into his original sale to Juventus.

OUT – Fernando Torres: Since lifting the European Championship trophy in 2012 the striker they used to call ‘El Nino’ has had some ups and downs. After moving to Chelsea from Liverpool for a eye watering $65 million, Torres’ carreer started to take a downward trajectory when he was unable to rediscover the form he showed with Atletico Madrid or at Anfield in London. After a baron year with AC Milan he was loaned back to Vicente Calderon where he showed glimpses of the form he was one capable of and was unlucky not to be selected for Euro 2016. Torres won the Golden Boot at Euro 2012 with three goals, including one in the final.

IN – Artiz Aduriz: The 35-year old striker wasn’t anywhere near the Spain squad four years ago but 36 goals in 55 appearances for Athletic Bilbao last season made him impossible not to be included for Euro 2016. His only previous experience in international football was 15 minutes in a Spain shirt during a Euro 2012 qualifier versus Lithuania.

OUT – Fernando Llorente: Another Athletic Bilbao forward, he made 262 appearances fro Los Leones between 2005 and 2013 before moving to Juventus. After falling behind in the pecking order to, guess who, Alvaro Morata, he retuned to Spain with Sevilla where the 31-year-old has struggled to make an impact in his first season.

IN- Nolitio: This striker begun his career in the lower leagues. In 2008 he signed for Barcelona but was unable to make it into the senior team playing predominantly in the reserves. After a season and a half with Benfica he joined Celta Vigo where his career took a late turn for the better. 12 league goals last season helped Os Celestes to a 6th place finish in in La Liga

OUT – Alvaro Negredo: The 30-year-old has collected some big name clubs to his resume including the likes of Real Madrid and Manchester City. The striker scored the majority of his career goals with Sevilla and is currently on the books with Valencia where he had a poor season last year only being able to chip in with five goals in 25 appearances. 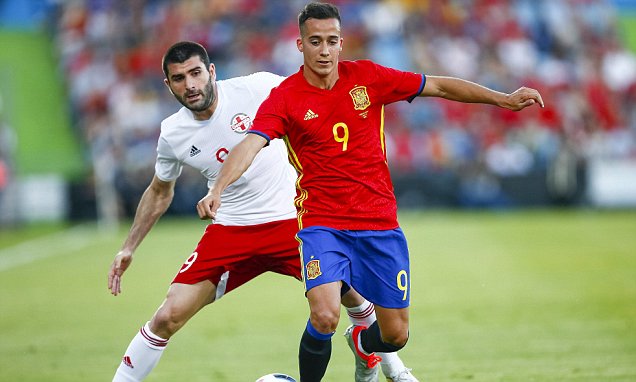 Lucas Vazquez in action for Spain during a shock 1-0 friendly defeat to Georgia.

IN – Lucas Vazquez: Another product of the Real Madrid youth system. The winger has broken into the first team squad at the Bernabeu this season after a season on-loan at Espanyol. The 24-year-old is mainly used as cover or an impact substitute for Zinedine Zidane’s Galacticos but it is clear he has a bright future ahead of him.

OUT – Juan Mata: The 28-year-old attacking midfielder was thought to be unlucky not to be included in La Roja’s set up for Euro 2016. After escaping the restrictive tactics of Jose Mourinho with Chelsea to join Manchester United in 2014, the former Valencia man may well be looking for another club this summer with the news that the Portuguese coach has come back to haunt him in Manchester. Mata scored Spain’s third of four in the 2012 final.

IN – Koke: The 24-year-old is another member of the latest generation of Spanish players to make it big on the European stage. The central midfielder has played at every level of Spain’s youth set up since the age of 15 an is likely to be a fixture in La Roja’s set up for years to come. He was instrumental in Atletico Madrid’s run to the European Cup final.

OUT – Santi Cazorla: The Arsenal midfielder missed the majority of last season with a serious injury and was unable to make a late return to fitness in order to be considered for Euro 2016. During previous seasons in London he has been one of Arsene Wenger’s stand out performers and has taken the captain’s armband on numerous occasions. The former Malaga and Villareal man currently has 77 Spain caps to his name while boasting a tally of 14 goals.

IN – Thiago Alacantara: The central midfielder, most often known as ‘Thiago,’ made the jump from La Liga to the Bundesliga to join Pep Guardiola at Bayern Munich in 2013. Born in Italy to Brazilian parents the 25-year-old already has three Bundesliga titles, four La Liga winners medals as well as two European cups and three FIFA Club World Cups to his name.

OUT – Xavi: The Barcelona-lifer made over 500 appearance for the La Liga champions and amassed an impressive 133 caps for Spain, leaving him in 2nd place behind Iker Casillas in Spain’s most capped players. Now 36-years-old, retired from international football and playing for Al Sadd in Qatar, Xavi relinquished what he called “his” team to former Barcelona midfield partner Andres Iniesta. It’s safe to say the side is in safe hands.

IN – Bruno: The Villareal defensive midfielder was included in the squad to bring some physicality and defensive solidarity to La Roja’s midfield. At 32-years-of-age he has spent his entire career with Los Submarinos Amarillos. Well behind in the pecking order in Vicente de Bosque squad he at least offers some versatility to the rest of the Spanish players at Euro 2016.

OUT – Xabi Alonso: The Bayern Munich midfielder retired from international football after the 2014 World Cup. The 34-year-old has a World Cup and two European Championships to his name. The midfield anchor also scored twice against France in the quarter-final on the way to Spain’s second successive European Championship. A great player in his own right, he is not quite at the same level as Iniesta or Xavi.

IN – Mikel San Jose: The Athletic Bilbao man can play either center back or defensive midfield. He spent three years with Liverpool between 2007 and 2010 and never made a single appearance in the first team but played regularly in the reserves. The 27-year-old’s career really took off when he moved to back to his native Basque country and has now made nearly 200 appearances for Los Leones.

OUT – Javi Martinez: After the 2014 World Cup the Bayern Munich midfielder come defender missed the entire 2014/2015 campaign after tearing knee ligaments against Dortmund early in the season. He has so far been unable to recoup his previous form and consequently lost his place in the La Roja set up.

IN – Hector Bellerin: The right-back is one of many products of the famed La Masia youth system. In 2011 Arsenal gave him his first professional contract and he was snatched away from Barcelona. In 2014 he was fortunate to make his first team debut for the London due to injuries to more senior players in squad but the 21-year-old has never looked back since. With Dani Alves retiring from the Nou Camp he is likely to be the subject of Luis Enrique’s desires in Catalunya.

OUT – Jesus Navas: The former Seviila winger has been a bit part player for Manuel Pelligrini’s Manchester City. After making nearly 100 appearances for the Blues he has only managed to bag a paltry four goals. Despite appearing in some high profile games in the EPL and Champions League laat season, his overall performances were not enough to get him onto the plane for Euro 2016. In Euro 2012 though, he did score a crucial goal against Croatia which secured top spot in the group stages.

IN – Marc Bartra: After becoming disillusioned with the lack of first team opportunities at Barcelona the 25-year-old has just singed for Borussia Dortmund for fee thought to be in the region of an unbelievably thrifty $10 million due to a minimum release fee clause. The center back has amasses 10 caps for La Roja so far in a promising career and is considered to be a long term replacement for either Sergio Ramos or Gerard Pique.

OUT – Raul Albiol: Formerly of Real Madrid and Valencia the central defender is currently contracted to Napoli. The 30-year-old scored Spain’s second goal in the 4-0 rout of Italy in the Euro 2012 final. He has 50 caps to his name but has been a constant afterthought to higher-level players in his position within the Spain team.

IN – Cesar Azpilicueta: The right-back is a constant in the Chelsea team after moving to the London club from Marseille in 2012 for $5 million. He began his career with Osasuna where he made 99 appearances for the club before moving to the South of France. With Chelsea he has won the English Premier League and the Europa League.

OUT – Alvaro Arbeloa: The Real Madrid full-back was reportedly exiled from the Spain squad after a public on the field incident with the then Atletico Madrid and Spain forward Diego Costa. As it happens neither of the players will be in France for Euro 2016 but the scuffles between the two players during a Madrid derby match two years ago has cost the former Liverpool defender his place in the national team. 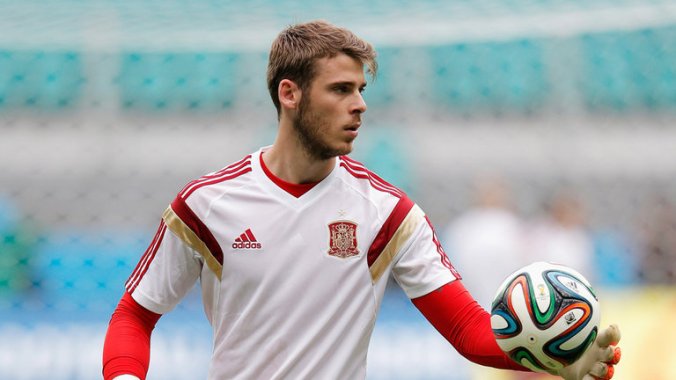 In the build up to Euro 2016 David de Gea was in the spotlight for the wrong reasons.

IN – David de Gea: The Manchester United stopper is currently subject to allegations of assisted rape. The circumstances brought a cloud of misery over the Spain squad leading to de Gea to publicly deny the claims which became public just days before Spain kicked off their Euro 2016 opener against Czech Republic. Since moving to England in 2011 he has arguably been one of the best keepers in the country. At the age of 25-years-old he has displaced stalwart Iker Casillas and is expected to occupy the number one jersey for some time.

OUT – Pepe Reina: The Napoli keeper was an understudy to Iker Casillas during all of La Roja’s triumphs in 2008, 2010 and 2012. Now 33-years-old he has had to make way for younger potential for Spain but is likely to continue at club level in Serie A.

IN – Sergio Rico: The 22-year-old Sevilla goalkeeper has a bright future ahead of him. He rose through the youth ranks with Los Rojiblancos and has made the goalkeepers position his own since December 2014 procuring a vast amount of experience in La Liga, the Champions League and Europa league in the process.

OUT – Victor Valdes: The former Barcelona keeper was ruled out of the 2014 World Cup through injury, an injury which essentially ended his career in Catalunya as well. When his contract expired at Camp Nou he was recruited b Louis Van Gaal at Manchester United. In two seasons at Old Trafford he made two appearances and was subsequently loaned to Standard Liege for the second half of the 2015/2016 season.