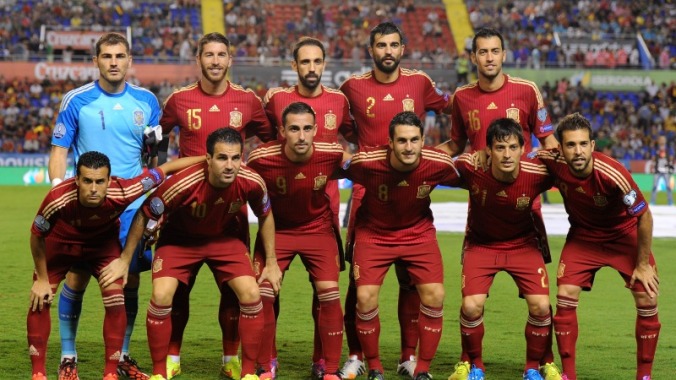 This time four years ago we were sat around calling one of the best teams in the history of football boring because a) they won all the time and b) were so good that it wasn’t fair. Fast forward to today and after a disastrous 2014 World Cup in Brazil, Spain’s untouchable reputation has somehow been reduced to rubble. Despite all this, the reigning champions will undoubtedly be difficult to stop and anyone who pulls La Roja out the hat in the office sweepstake will have every reason to be confident.

How They Qualified: Spain topped Group C and qualified with ease. Only a 2-1 away defeat to 2nd placed Slovakia was an unwelcome blemish on their record that raised plenty of even more unwelcome questions over Spain’s ability to win the European Championships for an unprecedented 3rd time in succession.

It’s hard to find a coach with a better record on the international scene than the Spain boss. The World Cup in Brazil may have turned into a circus with some of the saddest clowns you’ll ever see but there is still a wealth of talent for the former Real Madrid boss to choose from. This will bring with it some difficult decisions because since Xavi retired, Casillas has had a tumultuous time with Porto and Diego Costa’s form has declined dramatically, leaving some tough decisions to be made for the starting 11.

Del Bosque with a number of selection headaches.

It became apparent many moons ago that if Barcelona were ever without Xavi, there was always Andres Ineista. Then came the debate over who was better, I certainly can’t decide. Del Bosque sums up his contribution best: “He is the complete footballer. He can attack and defend, he creates and scores, technically he is perfect and he plays so naturally, almost without effort. It’s like when Roger Federer plays tennis, he barely sweats.”

One To Watch: David Silva.

The midfielder may have been found out a little bit for Manchester City this season as the blue half of the Northern powerhouse stuttered domestically but just but don’t write the diminutive playmaker off yet. If you think about it, it’s hard to come up with many better players at this summer’s Euro 2016 than the central attacking midfielder in a 4-2-3-1 system other than the former Valencia midfielder.